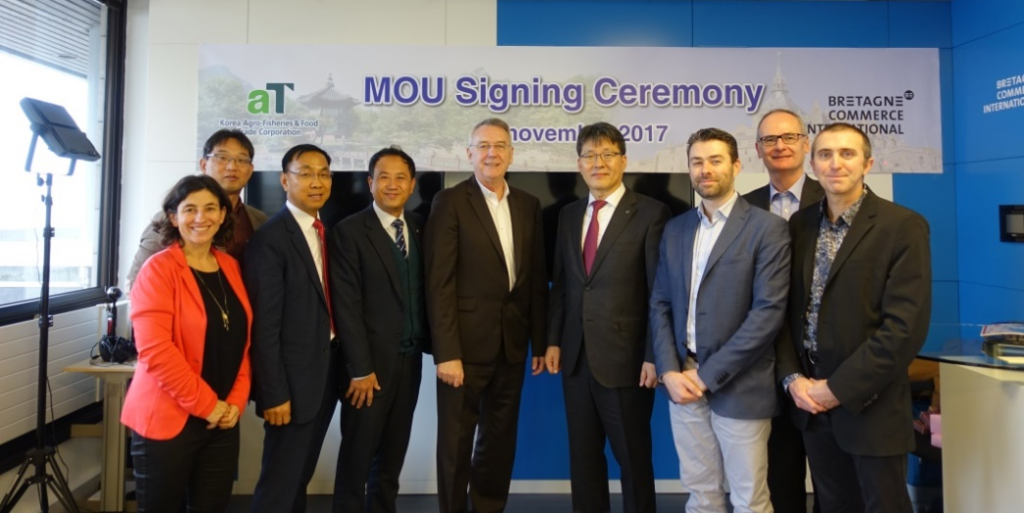 The goal of this agreement is to encourage exchanges between Korean and Bretagne companies in the agricultural and agri-food product sector.

Bretagne Commerce International and Korea Agro-Fisheries & Food Trade Corporation have already had a chance to work together several times:

• Korea Agro-Fisheries & Food Trade Corporation in particular takes a stand at the Open de l’international in July, a venue in Bretagne that the association rounds out with visits to Korean companies in Bretagne.

• Last September, a culinary event was organised between Bretagne and Korean companies to promote Korean flavours and see how these ingredients could be incorporated into the products of Bretagne companies.

The agreement signed today makes official the working relations already established. This strengthened cooperation will provide companies in both countries with even greater support in their approach to the two markets, especially when seeking local partners.

Korea Agro-Fisheries Trade Corporation is a government agency responsible for promoting Korean agri-food and agricultural companies. To encourage its international development, the agency cooperates with equivalent bodies worldwide to promote rapid, relevant relations between the companies in these sectors. These cooperations encourage and accelerate the opportunities for Korean and foreign companies.