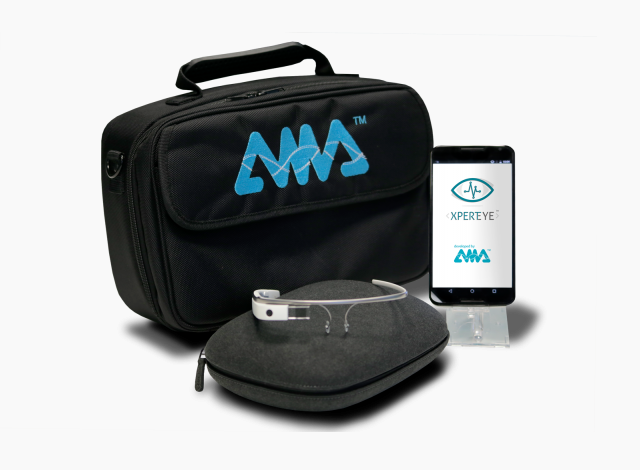 Advanced Mobile Applications (AMA, Rennes) has developed a lightweight, mobile kit comprising a pair of smartglasses, a software suite which it has developed and a specific telephone for industry and medical professionals.

Xpert Eye Mobility M1 allows the person wearing the smartglasses to transmit what he sees to a remote expert and keep his movements totally free. This is designed for remote medicine, in surgery or emergencies. Health professionals have already had a chance to get to know the solution.

AMA has had an American subsidiary in Boston since February 2016 and is preparing to roll out the solution in the USA and Europe. Xpert Eye has also been used in the hospital in Patmos, Greece since September. Lacking financial means, the system will allow discussions on cases with doctors the world over and to compensate for the lack of doctors and in dealing with emergencies.

AMA is also working with Optinvent (Rennes) which specialises in smartglasses and smart headset technologies incorporating augmented reality. The two companies are able to offer a new experience in games and mobile apps on smartglasses by combining their expertise. Their ©Populate project, for example, allows two users playing against each other to experience a different game, in augmented reality. The project combines three working areas: multi-equipment video games, generating a crowd of people in 3D and differentiated management of the behaviour of players.

In the summer, Optinvent raised further funds of €200k to develop Ora-X, a smart, augmented reality audio headset for the general public. Deliveries of its smartglasses for the logistics, maintenance and industry sectors are just commencing and new projects are underway with Bosch and GRDF.