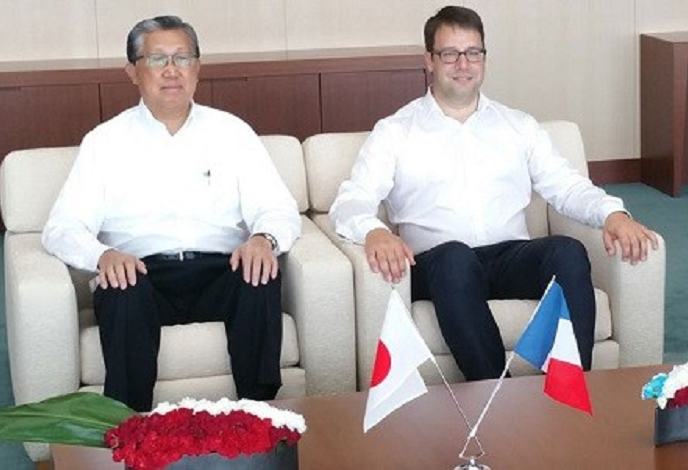 Each summer for thirteen years now, a delegation led by the President of the Bretagne region has travelled to Japan to meet the leaders of major Japanese groups in Bretagne and to reinforce ever closer ties with Bretagne.

During this tour organised by Bretagne Commerce International, President Loïg Chesnais-Girard was able to meet the new chairman of the Sanden group, Mitsugi Takahashi, the vice-president of the Canon group Toshua Homma, and the new president of the Nissui group (Cité Marine), Shinsuke Ohki.

These companies represent 2/3 of the 3300 jobs dependent on Japanese companies in Bretagne. “These meetings have allowed us to preserve the bonds initiated with the previous leaders and emphasise the desire of Japanese companies that the relationship with Bretagne lives on beyond the men who initiated it”, commends Loig Chesnais-Girard.

The President also met with the new French ambassador in Japan, Laurent Pic, to discuss various topics with him, including the opening of the Japanese market to agri-food products.

Finally, working sessions were held with Nedo, partner of the French Environment and Energy Management Agency (ADEME) in France, and the Jetro, Ministry of Foreign Trade. They have allowed the progress of relations on energy issues to be monitored, mainly in relation to smart-grids and reflection on new avenues of partnerships.