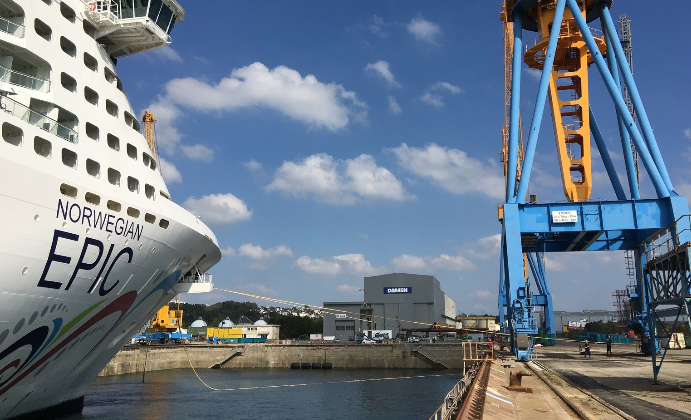 The shipyard Damen Shiprepair (Brest) took charge of one of the largest cruise liners in the world last October – the Norwegian Epic owned by Norwegian Cruise Line. This contract is a godsend for the subsidiary of the Netherlands shipbuilder who is seeking to carve a place for itself in the competitive liner market. The dry docking was mainly to refurbish public spaces (~30 km fitted carpets, 2000 mattresses) and change two engines. In an interview with the Journal des Entreprises, the new Dutch director of the Brest shipyard, R. Diepenbroek, was highly enthusiastic about working in the commercial port of Brest, calling it a “fantastic” yard that the people of Brest and the French people seemingly fail to appreciate to the full.

Photo credit : damen.com
For further information, contact us at fdi@bretagnecommerceinternational.com