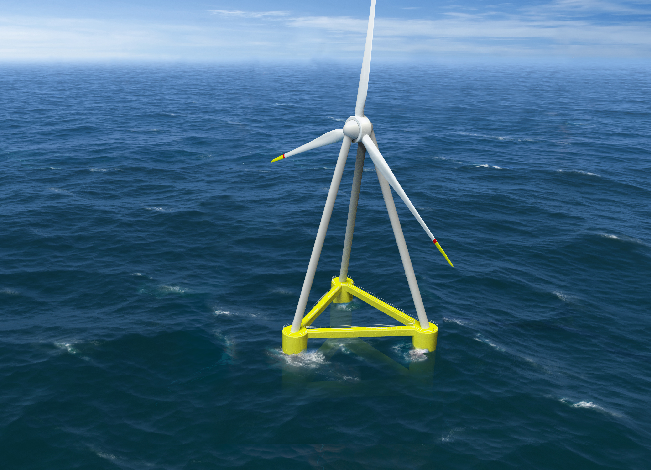 Its patented concept is a real technological breakthrough. It replaces the classic mast by three arms and is supported on a trellis, which helps to distribute the weight of the structure, and thus to improve resistance to fatigue. Due to its rigidity, the architecture also eliminates the problems of vibrations inherent in the mast. Unlike offshore “fixed” wind turbines, floating wind turbines can be deployed at depths of beyond 50 m, and be located far from the coast with fewer conflicts of use and the ability to create huge parks…

According to the CEO Mr Guyot, a floating wind park of 300 km over 50km (15,000 machines) would allow the possibility of replacing 58 French nuclear reactors (400 TWh/year)! In addition, floating wind turbines allow for the building and full assembly of docked machines, unlike offshore fixed wind turbines. All these benefits help reduce the cost of the structure, and therefore the cost of producing electricity, while improving the rate of availability of the park.

In September, a test campaign on the wind turbine prototype at 1:50 scale was conducted at Ifremer Bretagne centre’s testing basin. This phase of testing permitted successful validation of the relevance of the concept: the wind turbine can withstand the strongest storms without pulling too hard on the anchors; it turned against the wind even in the strongest winds. Eolink is now seeking to raise between €600k and €1m in funds to continue testing on a 1/10 model in 2017-2018 and have raised the possibility of mounting a consortium to develop the project.