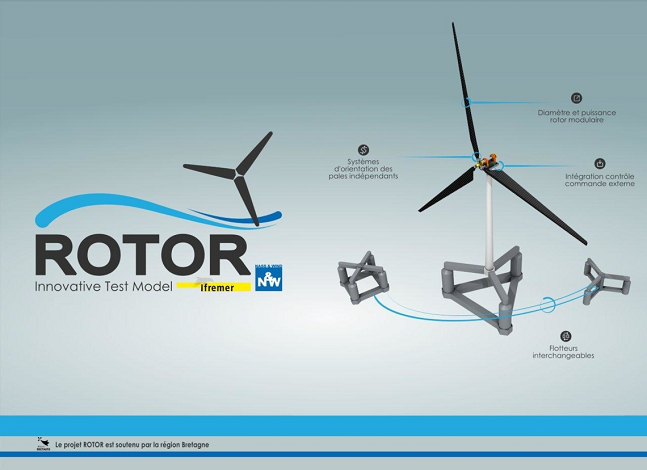 Nass&Wind Industries (Lorient) and Ifremer launched the ROTOR project, a platform for testing the concepts of floating wind turbines in test basins.

The engineers at Nass&Wind Industrie, specialising in naval architecture and offshore wind turbine command-control, joined forces with Ifremer’s hydro- and aerodynamics experts. The pooling of these skills should lead, at the end of this year, to the setting up of basin testing facilities dedicated to floating wind turbine projects equipped with horizontal axis turbines. The latter will take the form of a turbine mock-up adaptable to all projects, irrespective of the type of float, for capacities ranging from 6 to 10 MW. It will consist of a modular floating structure and a turbine, with a rotor three meters in diameter, allowing the testing of power and speed control systems, directly integrating the control-command strategies of turbine manufacturers. Each of the blades may also be oriented about its axis independently. This model will also be equipped with a battery of sensors.

The data acquired during the tests will enable the digital models to be developed for the design and optimisation of real-size floating wind turbines. The future model will be designed, constructed and carried out at the testing basin at the Ifremer centre in Brest. This project was born as a result of the lack of an installation to test the partnership of the floats and turbines proposed by the various manufacturers in the context of pilot projects for floating wind turbines.