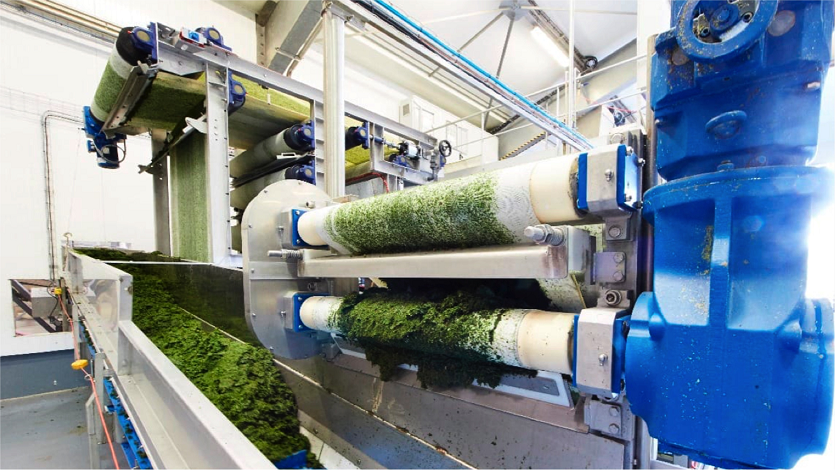 Olmix (Brehan, 850 employees, 2017 turnover: €166 million, 70 to 80% for export), specialist in natural animal nutritional supplements, won the 2018 “Food industry & organic (turnover of €100 million to €1 billion)” award for growth companies in late May. This award is an incentive for the SME to pursue its organic, natural and biotechnology solution development strategy.

Olmix will invest €70 million over 3 years to create algae-based ranges for farms. Project SAGA, for “Sans antibiotique grâce aux algues” (“Antibiotics free thanks to algae”), is developed in Merdrignac, where algae-based nuggets and breaded products are made. Olmix wants to reduce antibiotics in animal nutrition by mass-producing algae. In addition, Olmix and Inra’s Val de Loire research centre have demonstrated than antibiotics could be replaced with algae in farms. Studies conducted by 25 researchers have shown that green algae, Ulva armoricana, could improve animals’ immune system and reduce the use of antibiotics. The company will also soon commercialise Algimun, a natural algae-based supplement that will be incorporated into the production of cattle feed.

With this funding, the group will step up its industrial and logistics deployment. Earlier this year, following the buy-out of the former Sica Saint-Pol-de-Léon unit, Olmix finalised the acquisition of a 3rd production site specialised in algae cracking (Saint-Hilaire-de-Riez, Vendée), to increase the company’s European market supply capacity. In addition to the buy-out of Farmers House via its Dutch subsidiary, Olmix also bought out Sovipor, PRP Technologies, Aroma Celte… with the aim of venturing into other areas: vegetable with PRP, human-care and pharmacy with Aroma Celte.

Already operating in about a hundred countries, Olmix is also stepping up its international deployment strategy. In November 2017, the group opened a site in Vietnam, which is expected to produce 150,000 tonnes of animal feed additives and nutraceuticals annually for feed plants and farms. It will focus on the production of new feed additives for the Asian market, such as mShell (booster for shell and bone quality) and ASEAD (innovative acidifier range). Productions will use innovative ingredients or kernels produced in France with Olmix’s unique patented technologies. Olmix Asialand currently ranks amongst the 3 leading operators in animal nutrition and health in Vietnam. In Russia, Olmix will have a €15 million loan to develop its plant in Saint Petersburg. This modernisation plan will enable the company to locally produce its ranges for the Russian market. Eventually, it intends to produce organic fertilisers for the agricultural sector and animal products made from algae imported from Bretagne, but with other elements sourced in Russia. Olmix aims to increase its sales in Russia from €1 to ~20 million.

Soon, Olmix Group and several partners of the sector will set up an accelerated society named BioAlg. The project should organise and boost the sector, upstream, by stepping up algae procurement and downstream, by supporting the many projects for the creation of natural products used in cosmetics, agriculture and the food industry, as well as in bioplastics, biostimulants and biofertilisers. Products in biofood could thus be an alternative to salt and sugar.