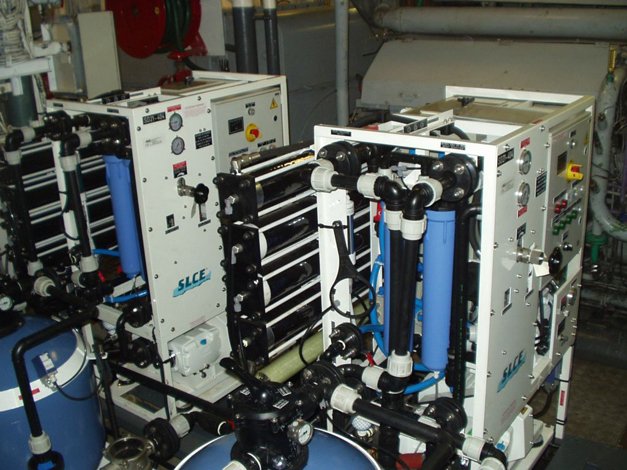 In the naval sub-contracting sector, SLCE (Lorient) is today a world leader in reverse osmosis for on-board applications. This is a fresh water production technique which every year increasingly captures its place on board ships and on land. It involves putting sea water in contact under high pressure with the surface of a semi-permeable membrane which produces a fresh water permeate and discharges a slightly salt solution into the sea.

Founded by G. Gury and P. Rio in the middle of the 1980s, success started with a first contract with the Piriou yard, then with other shipyards and lastly the military contract, which represents more than 150 osmosis units on ships of the French Navy and almost as many on vessels of foreign navies: Morocco, India, Saudi Arabia, New Zealand, Singapore, Egypt, Belgium, Algeria, Poland, Abu Dhabi, Kuwait, Thailand, Mauritania, Indonesia and Gabon. Liners account for 25% of its turnover, with customers like STX in Saint-Nazaire (MSC Divina and Preziosa, Europa 2 or the future builds of the RCCL Edge programme and abroad). It also works for the new Aida boats built at Mitsubishi in Japan. The company also does business in the oil and gas market and has developed an energy recovery range specific to land-based facilities which could be of interest to islands. Experiments on the Ile de Sein, for example, have seen a boiler requiring energy of 75 kWhp replaced by an osmosis-recovery unit which only consumes 3 kWh. The company exports 75% of its turnover, above all to Asia, Pacific and Northern Europe. It continues to innovate to meet the requirements of all its markets.