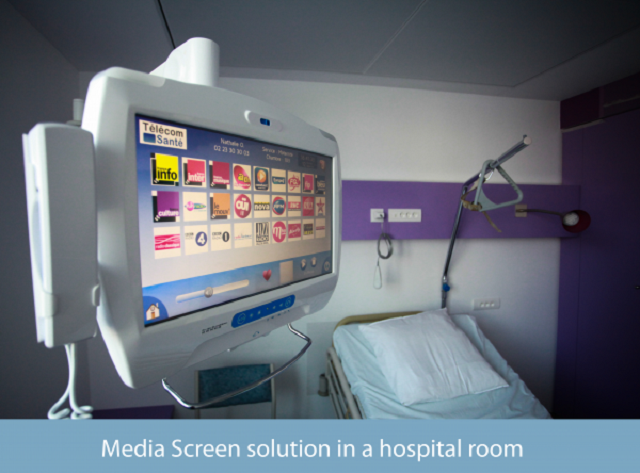 In a hospital context in which staff are too few, tired and over-extended, Télécom Santé (Rennes) designs solutions to discharge hospital staff of numerous repetitive, unnecessary and low added-value tasks.

Télécom Santé wants to fit out hospital rooms with its Media Screen, a multi-function touch screen that replaces the TV and the patient’s health monitoring interfaces. Each professional intervening (nurse, doctor, maintenance staff…) has a badge offering personalised access to the Media Screen enabling them to enter their data: temperature, change of sheets, dressings, drips, water leak repairs, meals ordered… This avoids the same data being entered numerous times and doubles the time present with the patients for better care. At present, 2,000 beds in about 25 clinics in France are fitted out with the system but  the market is huge: 1,800 health institutions with a potential 420,000 beds to be fitted out in France. Not to mention the international market, on which Télécom Santé expects to achieve 30% of its turnover within 5 years. Télécom Santé is supported by Bretagne Commerce International in its efforts to export to Eastern Europe and the Middle East.

The SME is aiming for turnover of €5 million in 2017 compared to €3 million in 2016. In 18 months, the company has grown from 14 to 41 employees, hiring sales representatives in France and to expand internationally. To support its development, the company has raised €8 million from the capital investment funds already having a stake in the company (Kreizig Invest, 3T) and from newcomers (Generis Capital, Unexo, Breizh Up and Crédit Agricole Ille-et-Vilaine Expansion). €4 million  will be dedicated to export projects and the launch of new products.

Télécom Santé has already launched the BabyCam (camera placed above the beds of premature babies), the orientation terminal (at institutions’ reception desks to record and guide people coming in). The communicating hospital bed is currently under development: equipped with sensors, it will detect when barriers are raised or lowered, the patient’s twisting and turning, enuresis, etc. Telecom Santé is also developing AmbuTrack,  a new application to optimise outpatient care paths and geolocate a patient in real-time, through an RFID chip placed in the file or the coat that is connected to antennas placed in different zones including the operating theatres.  This wristband system helps improve the flow of outpatient services that are becoming increasingly significant and thus help keep operating costs under control.