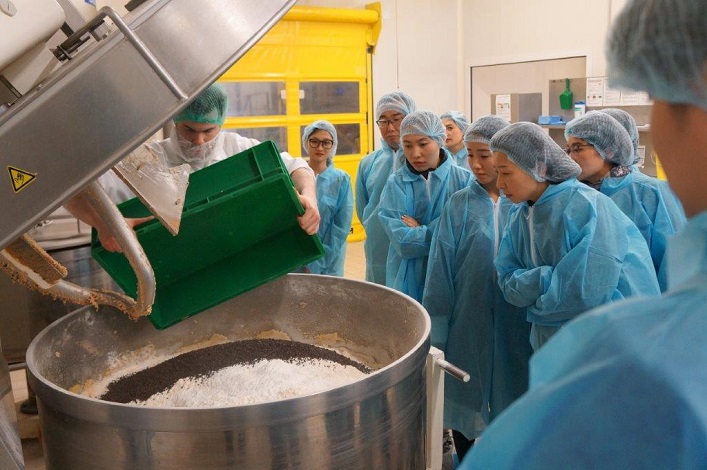 Bretagne products soon on Chinese television? This is more than likely following the “Selling to Chinese teleshopping channels” organised by Bretagne Commerce International, BusinessSky and CHSA. Buyers from 28 Chinese teleshopping channels met 34 Bretagne companies during a two day visit in April, mainly from the agri-food, manufacturing and furniture sectors. Also on the programme were visits to the Mère Poulard factory at Saint-Etienne-en-Coglès and the “Allot” workshops at Loudéac.

Never before seen in Europe!

The visit by a delegation of buyers such as this is totally new in Europe. Last year, CHSA put the spotlight on Australia in its programmes and wished to repeat the experience, this time with France. “We considered three French regions and finally decided on Bretagne as it has a high-quality and very diverse agri-food industry. Also, the assistance from Bretagne Commerce International with its specific department for supporting foreign buyers, which had notably supported a Chinese supermarket chain at the end of 2015, tipped the balance in favour of Bretagne”, we were told by the CHSA representatives.
Bretagne Commerce International is an old hand at this, as the regional support for Bretagne companies internationally organised in 2016 alone eleven visits from overseas buyers who were able to meet 144 Bretagne companies and visit 24 factories.

Teleshopping is viewed as very modern in China and generates a far greater turnover (€5.5 billion) than in France, growing by 13% in 2015. And it sells everything: food, household items, clothes, cars and travel. Within a few months it will be the turn of sardines, as a sales agreement has now been signed between CHSA and the Conserverie Le Gonidec. The first in a long series, we wager.
Aware of opportunities for Bretagne companies provided by this totally new operation and for it making Bretagne visible in China, the Bretagne Regional Council has taken over part responsibility for organising the fair to showcase products from Bretagne companies.