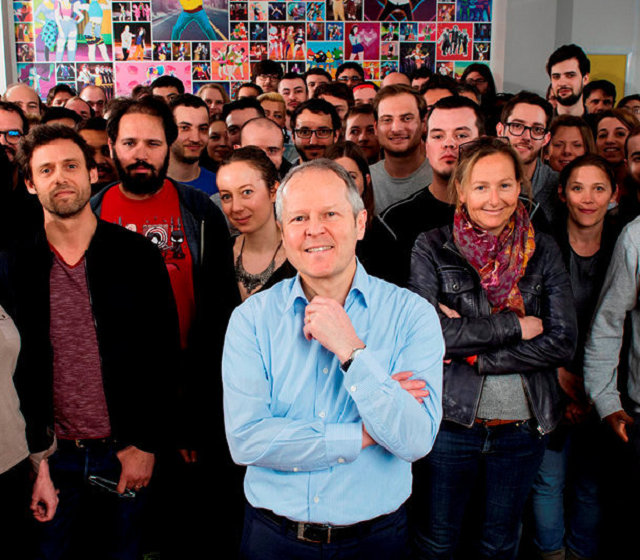 In forty years, from Carentoir in Morbihan, to five continents today, Ubisoft has become a world leader independent video game creator. 14,000 employees, 30 studios worldwide, of which the top 3 are in Canada, Romania and China, €1.6 billion in sales, €110.2 million in operating income (€3.1 million in 2017) , €64.4 million in profits (against a loss of €20.8 million in 2017), and the five Guillemot brothers still at the helm. These positive results are related to digital transformation, engagement with players and new Asian markets.

From Carentoir to the world

The parents, like the grandparents of the 5 Guillemot brothers, were entrepreneurs. In the 80s, the older brothers Michel and Claude begin to reflect upon the family business that was having a difficult time. They started selling computers. From this first experience of trading, was born the idea to import entertainment software to diversify the business.

Yves became CEO in 1988 and still is. Ubisoft soon became a games publisher with the aim of better controlling the entire industry. With an economic model of franchises to develop their creations. The first studios opened in Canada and Romania. In 1996 public listing was required to seek the financial staging posts of this new entertainment economy with consoles, PCs and smartphones. Numerous instances of external growth accelerated the development of expertise.

Resources for creating a game

“A video game like Assassin’s Creed involves 1000 people with 40 trades in 5 to 7 countries“, explains Christian Guillemot. A game can cost from 50 to 300 million euros. In other words, each launch is a real challenge.

Ubisoft relies on talent that integrates its 30 studios around the world. The group is increasingly recruiting directly at the exit of renowned universities, in order to always benefit from young people trained in the latest developments. Recently, Ubisoft has opened a new recruiting centre in the United States near Raleigh and its sister university in North Carolina.

Of the 14,000 employees, 2500 are in France. They expect 1,000 more recruitments in five years time, just in France. It should be noted that Vivendi owns 15% of Ubisoft’s capital which it tried to buy out in 2016, but Ubisoft has always fought to retain its independence and the five Guillemot brothers hold 18% of the capital. However, they have brought the Chinese Tecent into the capital at 5%, a real strategic choice to enter the huge Chinese market.

Extend the life time of creations

In recent years, Ubisoft has been trying to extend the life cycles of its creations and to develop open innovation with players. “We release less games but we involve our players and their communities more“, said Yves Guillemot. Some games can see up to 30 million online players, so the stakes are high. Raving Rabbids, Just Dance, Rainbow 6, For Honor, The Crew… Successes are still coming one after the other. Television and cinema broadcasts arrived in 2018 with the adaptation of Assassin’s Creed.

Ubisoft continues its diversification with the creation of escape games in virtual reality. The latest, “Escape the Lost Pyramid”, was developed by Blue Byte, a subsidiary of Ubisoft. Based on its game Assassin’s Creed Origins, it immerses the player in ancient Egypt. The game is already in operation in the USA, France, the Netherlands and Germany, where Ubisoft has just opened a studio in Berlin (60 people, 150 by the end of 2020).

Partnership with Google on cloud gaming

Google has launched a cloud gaming technical test (Project Stream) in its Chrome web browser, in partnership with Ubisoft. The idea is to propose a game streaming system with games running on Google’s cloud servers. The test is being conducted with Assassin’s Creed Odyssey for a limited number of players in the USA. Similar services already exist, including the Breton Blacknut, nicknamed the Netflix of video games.

2018 EY Entrepreneur Of The Year Award

To crown the performance and success of Ubisoft, Yves Guillemot received the national entrepreneur award bestowed by EY on the 18th of October.  It should be noted that the contractor had already received this award in 2009.